(I have never been especially gifted at writing these sorts of things, have I? f(^_^;) )

Hello, fellow LRNJ users! I am here because foreign languages of all sorts seriously intrigue me. After having taken Japanese classes at college for a bit under a year, I feel that I already have learned so much and wish to retain/expand on what I have learned so far. Ideally, I would like to become semi-fluent in Japanese; but for now, I will focus on just doing better each day.

Before learning Japanese, I studied Spanish starting in elementary school and continued up until my first year of college. I would not say that I am fluent in Spanish by any means, but in certain contexts and with certain natives, I feel pretty comfortable conversing.

I wonder what other languages I may decide to study down the road.

What brings you to LRNJ? Why did you choose Japanese to study, and how far do you plan on maybe going? Have you studied any other languages? How about we embark on this journey together ~~ 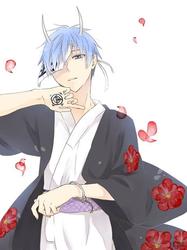