Can you translate this into a Japanese, please.

Hi. Can someone translate this English sentences into a Japanese one. A polite one, if possible.
It's supposed to be a japanese essay but I still doesn't know much about Japanese, so please, help me out. Please? Please! Please!!!

When I was a little girl. In order to support me, my parents left me to my grandparents and then they started working here in Japan. Every summer vacation in my home country(in the Philippines), they return to take me here(in Japan) but still they don't have much time for me because of their works. That's why up until now, I still hesitate to share my thoughts to them. All my entire past years, I've been with my grandparents but I'm not alone. Because my Aunt Liza also left my little cousins to us(to my grandparents) Same Reason. At first, I was so upset, because their attentions were split to the four of us. But the more we spend time playing together and also arguing, we've created a strong bond. 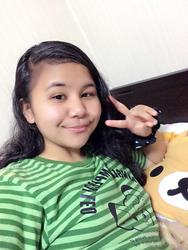