What are は or に called?

Hello everyone!
I wasn't sure if は (wa) was called an particle or something else, and could someone please help me translate its meaning in French? My friend, who's really interested in learning Japanese, is confused by the 3 writing systems (hiragana, katakana and kanji) and she always forgets that in Japanese, verbs are at the end of sentences. I would like to know how I could explain to her what are particles (if that's what they're called).
Thank you and have a nice day!
posted by Dorayakiko December 22, 2013 at 8:16am 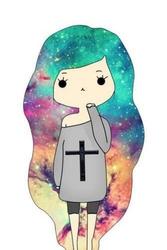